About the Master Trainer 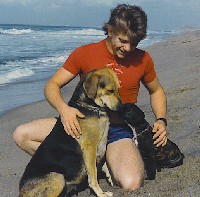 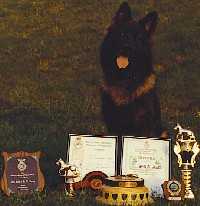 One of My Champions

Since I am known as a Master Trainer, you may wonder how that came about ...

As long as I can remember, I've had a close relationship with dogs. The truth is I don't know where I got this instinct. I come from a long line of dog trainers, back three generations, and I've been told it's hereditary. Since, from the age of six months, a German Shepard mix was my constant companion, that may be true. I don't know. It just is.

Dogs have been the one constant in my life. No matter what I do, it always leads to dogs in some form or fashion.

Throughout my training life, I have, on many occasions, wanted to quit and move on to something else. Not because I no longer enjoyed it, but because I got tired of fixing other trainers' screw-ups, lack of depth, and cruelty. I had become the screw-up fixer. No matter how many times I quit, I was back at it the next day. It's what I do and who I am.

I started my "professional" dog-training career in the U.S. Air Force. I learned a bit from the program, but still knew I could do more on my own outside the boundaries of their program. I didn't know why, I just knew I could. I later attended, or was sent to, several other programs around the world. Each time, I left feeling as though there was a key part missing.

I spent the next several years training dogs and observing wild pack dogs in their natural environment. What I learned from the dogs was exactly what was missing from every dog program I had ever been involved with. Mutual cooperation.

This finally led to the creation of my two personal training systems, the Natural Cooperative Training System™ (NCTS) for dogs, and the Instinctual Development System™ (IDS) for puppies.

While I know I can train a dog to do just about anything, my primary focus is on improving the behavioral quality of the companion and working dog. My "unique" systems and approach to training, and my ability to read animal behavior, has successfully saved animals that were considered to be beyond help by other trainers.

Below, you will find my credentials and experience ...

Courses of Study and Certifications

Agencies Trained With and/or Worked For